After writing my blog post Friday, we went out for a long two hour walk around the neighborhood searching for our missing cat Vex. Dreamer came in her stroller, and she seemed to enjoy it. We had no real success. There was a brief moment of hope when some men told us they'd totally seen a white cat and if we waited a few minutes it would probably appear again... but then told us it was a tiny kitten who was white and orange.

After coming home we ordered dinner, which took a while to arrive but was delicious. After eating we headed to bed pretty late... but as I lay down I said, "What is that?" hearing a noise. Ryan went to our bedroom balcony door and opened it to hear it more clearly.

Ryan flew out while I stayed in with Dreamer. Our bedroom faces the street behind us, the same street he'd been spotted on at 2 am two nights prior. Ryan talked to the guards there and showed them a photo and indeed, they'd seen him!

He came back and got me to help, and so I put Dreamer in the baby carrier. It was after 1 am, so we couldn't call "Vex!" loudly, but we whispered it.

One neighbor was out on his balcony and we called up and asked him if he'd seen a cat.

We were so excited!

Ryan frowned. "No, white and black?"

"Well, Vex isn't really black," I hedged to Ryan softly, "maybe he thinks it's gold?" Then to the neighbor, "Can we come up and look on your roof?"

So we went up all excited.. but nothing. On the way back down we showed him a picture of Vex. 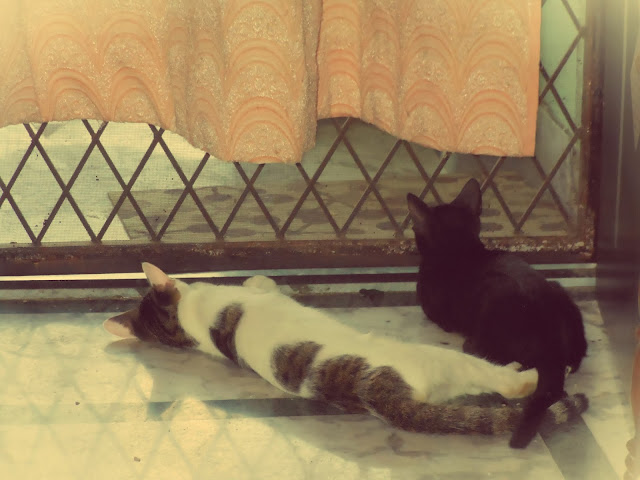 For half a second I was pretty depressed thinking this was all a wild goose chase but when we got back to the road we showed the photo to the guards again. They were emphatic they'd seen him.

"I bet what we heard was Vex and the white and gold cat meeting!" I realized. It made sense. They probably met, yowled, and then Vex fled, hence why he wasn't answering our calls. We searched a bit longer, but then went home. I went to bed with Dreamer. Ryan, who is on a night schedule for work, went out again two more times before going to bed in the morning. I went out early afternoon and then again in the evening. So far no more luck. Still, the guards insist they've seen him, so he's probably still nearby...