My dear readers, I totally thought I had published this the other day! I literally hit publish and closed my laptop and went to the vet and I guess it didn't work. I was shocked to realize that this didn't publish it. I'm post dating to this to the date it was written, but I didn't publish this for a couple days apparently.

We are so thankful Vex is home! 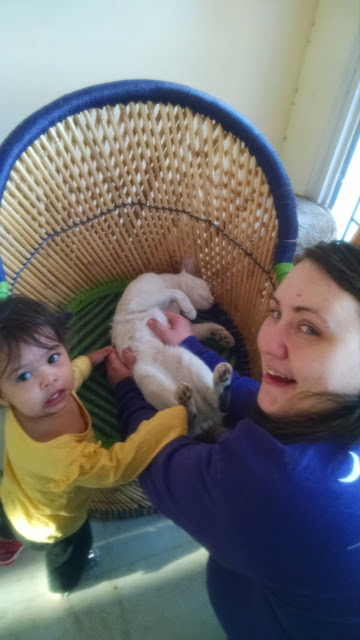 I woke up this morning because my phone rang. I didn't realize that's what woke me at first, as it stopped ringing as I became conscious. Ryan and I both opened our eyes, facing each other. My sleepy brain, knowing something had awoken me, focused on the sound of birds...

"Your phone rang," Ryan broke through my stupor. I fumbled and handed it to him. He looks at the missed call notification, shakes his head not recognizing it, and sets it down. It starts ringing again.

I can't hear everything on the other line, but I hear an excited voice say billi. Billi is Hindi for cat. Ryan gets off the phone and I say, "Go! Bring home our baby!" He nods, telling me Vex has been spotted, gets up and throws a shirt on and leaves.

Ten minutes or so later Ryan calls me. "It's definitely Vex," he says with some excitement, "But he won't come to me. I need your help." The urgency is clear.

"But I can't leave {Dreamer} alone," I say, looking at my still sleeping baby.

I fumble to get dressed, knocking on KC's door, explaining the situation to her bleary just woken self. All this wakes Dreamer, who initially smiling seeing both KC and I, then starts wailing as I leave. I can hear her crying all the way down the street.

Vex was spotted one street over, in the basement of an almost finished house (that is, still under construction.) The basement was littered with construction debris like empty cement bags and such. Ryan was sitting on the stairs, and asked me to sit there so he could go coax him. Vex was in the corner under the stairs, an area about four foot high with debris.

"Here," I said, "Food. Try to lure him out." I'd brought a little cardboard box with two handfuls of cat food in it.

"Okay," Ryan said and went over there. He shook the food and called and tried to coax him out. "Hear him?" he asked me as Vex meowed.

After a few minutes Ryan shook his head. "He's not coming to me. Maybe you should try."

We switch places. I come over, with Ryan saying behind me, "I couldn't see him, I'm not sure where he is." Pretty much as he says that I shine the flashlight right into Vex's face.

"Well, hello," I tell him, then call over my shoulder to Ryan that I see him. I shake the food and bring it up to closer to where he was standing, on a pile of debris. He lets me touch his head. Then I pet him as he ate... finally I was able to grab him. "I have him!" I called to Ryan.

He didn't bite or scratch me, but did strain to get away. Not very much at first, but as we passed the guard who had called and the car washer who apparently was the one to spot him, they cheered and he freaked out a little. I was able to restrain him, but it took all my strength.

When I'd seen his face I could tell he'd lost weight, but in my arms I could also tell he still had some girth. He'd been missing a week and two days, and definitely found at least some food in that time or he would be been a lot more gaunt.

We got him home and as I came in our front gate I triumphantly pulled off the "LOST CAT" poster that I had taped there a week ago.

We got him in and after the door was firmly shut behind us I let him go. He ran to Princess, who began licking him.

"Make sure he has food and water," Ryan said. I knew he did, since I'd gotten the food I'd brought with us, but I went and topped it off anyway. He ate and drank with Princess sticking to his side like a burr.

Ryan told KC to keep Dreamer back until we made sure Vex was acting normally. Princess was sniffing him all over... suddenly she hissed. Sigh.

With us, Vex was acting like himself. Before long he was rubbing against us, including Dreamer, who was giggling and saying gleefully, "Kitty!"

Next thing you know he's rolling over showing us his belly and letting Dreamer pet it. Yep, not a vicious bone in this sweet cat's body!

"Yeah, I bet he's been in a few fights. I'll get a warm, wet washcloth and wipe him off."

Looking him over he has gauge marks on his side. "I think a dog bit him," I say. "It's puncture marks and they're too far spread apart to be from another cat."

Meanwhile Princess is hissing. Admittedly, Princess is a very quick to hiss cat. She hisses at us sometimes. Also, when Vex got neutered he was her sworn enemy for like four days because he smelled like the vet. I'm guessing he smells funny, thus has her wrath. It's a bit ridiculous, but it should go away soon.

We've made a vet appointment for less than an hour from when I'm writing this, so we'll update you. Ryan talked to the guy who found him, who told us dogs have killed two stray cats on their block recently. I think our prayers and those of our friends and loved ones who prayed worked. God protected Vex, and hopefully the vet will just clean him up and tell us time and rest will restore him.

Okay, I'm off to the vet, actually. Maybe I'll do a second blog post today when I get back, if not, then tomorrow.

511- protecting Vex in our absence
512- letting the car washer spotting him
513- having the guard call us
514- KC being available to watch Dreamer
515- the vet being able to see us this morning
Posted by Pamela M M Berkeley at 5:39 PM