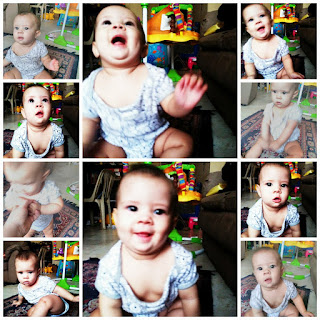 He's so active I couldn't just pick ONE six month photo to represent him!

Here's a quote of sisterly wisdom from Dreamer:

We are lucky she cherishes him so much because he can be a handful.

Dreamer was lying on her belly, legs behind her. Rider, also on his belly, leans over and bites her heel with his gummy mouth.

"Aghghgh!" Dreamer jumps up startled. I muffle a chuckle and tense myself to intervene if she's angry. Rider cries, sad his new chew toy was ripped from his mouth. "Aww," Dreamer says to him tenderly. She grabs his nearby teething ring, hands it to him and wraps her arms around him. "It's okay, it's okay." She pats his back lovingly and then returns to whatever she was doing.

What a great big sister she is!!!

Shortly after Rider started sitting I said to my mom, "I really didn't think he'd start crawling before he was sitting unassisted... but I haven't tried to see if he can sit in a few days."

So I tried three days after he started crawling, and yup, he can crawl and sit unassisted now!

Oh and that resemblance to his grandfather (my dad) continues... 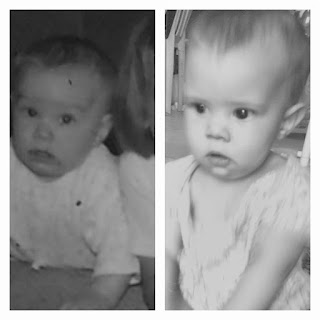