So the first AMAZING big change in my life allowing me to be busy?

I am on a successful therapy for my sleeping disorder!

Long term readers will know I have Non24 Hour Sleep Wake Disorder. It is a circadian rhythm disorder where my brain neurologically thinks the day is longer than 24 hours, making keeping a consistent schedule impossible without intervention. And I am truly blessed because for most N24 sufferers, nothing works. But as a sighted person with N24 one option open to me is light therapy.

I had tried light therapy with mixed success back when Dreamer was 8 months. I was trying to get on a schedule with her, and it sort of worked. I soon realized that I needed to combine it with melatonin. On the recommendation of my N24 support group I use a low dose, a quarter of a 3mg pill 1.5-2 hours before sleep. That worked fairly we we until Dreamer was a toddler.

My therapy light at the time was a stationary light box. I couldn't stay in one place at the exact same time every morning, Dreamer would need cereal and be running around. Plus I would want to get tea and go to the restroom and sometimes I wouldn't have the opportunity before I had to start. Additionally, Ryan working at nights mean if we were getting on a typical day schedule the overlap in our schedules was tiny. Which also meant no one had my back when the combo of Motherhood and sleeping disorder kicked my butt.

So I had to give it up, and I've attempted some since but with little success. Then this December I decided I'd try again, mainly to allow my daughter to participate in the upcoming holiday festivities. And... My therapy light had broken.

So I had to buy a new one... And I got a wearable!! Now I can get tea, feed the kids, etc while completing light therapy!!

And when it was clearly working Ryan talked to his bosses and got on a sort of second shift. He's not working a normal Indian day shift, but he's working 2:30pm to 11:30pm so he can wake up in the morning! The new shift is new and we are only 2 weeks in and it's not going smoothly yet, but we are hopeful.

But now I've been on a day schedule for two months and counting. And that's a miracle... 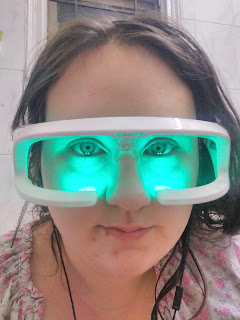