My Son is One

I keep repeating that, appreciating the rhyme as the truth of it still seems incredible.


We had a small birthday party that was really a "play date with cupcakes" but which went off well. Pizza, watermelon and cupcakes (boxed mix with my mom's recipe for buttercream frosting.) 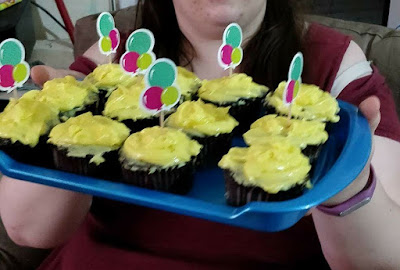 I am making it my mission to go back and back blog the months I've missed posting Rider's first year before another month goes by. Publicly announcing that. Let's see if that works to keep me on task.

He's been walking and talking since nine months. He can say hi, dane oo (thank you, used when we hand him something), Dada (for Daddy) , Mummy (for Mommy), Yaya (Ryan's mom), and just this week Ahma (for Grandmama, my mom). He has been climbing on and off furniture for at least two months.

He was a cute coo/squeak that means "yes" and most of how he communicates is pointing with his whole hand in the direction of what he wants (water, food, a toy, a person) and making a complaining noise, then if you ask him which he wants he'll make the happy coo. Like let's say he's pointing at the table that has a banana and a water bottle on it. "Do you want food?" I point to the banana. Unhappy noise. "You want water?" Point to the water. Happy noise. 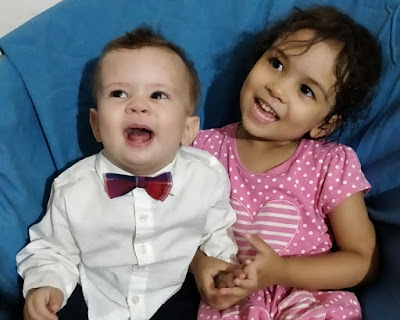 He loves books and will listen to picture books happily. He laughed at the funny part of a book I was reading to Dreamer the other day. She then asked me to read it again, and again he laughed in the right spot, revealing he doesn't just like books as a concept but can follow the plot lines.

He also pays attention to TV and videos. Which at that age Dreamer did not, she just ignored it, so we need to be careful about that.

He is extremely playful and initiates games like peekaboo and others of his own imagining. He is always ready for a laugh and even blows raspberries on MY belly. He gives kisses and hugs too.

We are still breastfeeding. Which sadly with my hormones means I've gained a ton. I seem to barely gain at all in pregnancy, be lower than conception at about 2 months and then gain  gain gain. Now that he's a year old I plan on being more intentional about getting my weight in control since I won't be so worried about supply.

He and his sister are best friends. In the morning whoever wakes up first wants to wake up the other. Reminds me of Anna and Elsa at the beginning of Frozen. He is finally getting big enough to be able to play with Genevieve. That is she's played with him for a while, things like peekaboo or blowing raspberries. However now he can keep up and play games like tag and tries to play with blocks and stuff.

Happy birthday my beloved son! God chose to give you to us and we are supremely thankful!! I am looking forward to more of you.