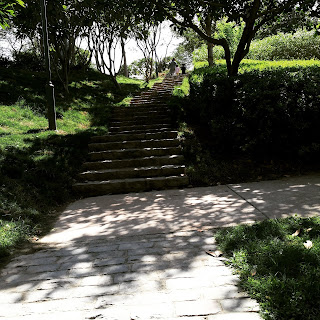 "One... two... three... four...," the four three year old children began counting as they cheerfully hopped down the stone, outdoor staircase. A smile came to my face. I looked to my left and my right, finding answering smiles in the grandmother and mother who were with me.

"This is homeschooling," one of them said contentedly to me.

We were at a park, letting the kids run around while the adults talked logistics. My daughter and her new friends held hands, played tag, picked flowers (which we had to tell them to stop, it's a park), chased ladybugs and collected leaves. It was wonderful.

This was one of the weekly meetings of our local homeschooling group.

That's one of the big changes I have been planning to tell you about, we are officially homeschooling now!

Dreamer turned four in May but we have been meeting often with other homeschooling families since January.  That might seem young to declare oneself a homeschooling family, since in many places school starts later. In our region of India the vast majority of children are in school at three. At latest perhaps by four. So we've been dealing with "where does she go to school?" questions for us on a weekly basis for well over a year. It began earlier than that, in fact, since people seek admissions into good schools far in advance, so I think I first dealt with this question when she around two.

But now a lot of her peers in America are also starting 4 year old kindergarten! On labor day I'll be doing a sort of "back to school" post about our plans for this year and next week I'll be talking about looking at philosophies and curriculum. This post is more an overview of how we got here!

I fell in love with homeschooling years ago, in college. I realized that the majority of my close college friends, strong women who I admired, had been homeschooled. Finding out that this educational choice, which is rare in the overall population, was something more than half of the friends I was attracted to in college had in common made me pause and then research fervently. Before I graduated I had firmly fallen in love with the educational philosophy and homeschooling my own kids some day was a dream.

This was years before I met Ryan or had Dreamer, of course.

When Ryan and I met online and were talking I mentioned my passion. He was neither enthusiastic nor did he write it off immediately. He had literally never considered the possibility and of course we had years to discuss it.

When Dreamer was two I brought it up and we both at least agreed we definitely didn't plan on putting her in school at three. Ryan and I both started school at five and found forcing small children to be in a classroom all day at such a young age to be ludicrous. I took this as we'd made a decision to keep her home while she was three, and when admissions season for when she was four would roll around again we'd decide once more which way to go. I thought we were taking it year by year.

Then in January 2017, a few months after we'd decided to keep her home at three, a school bus in our city caught on fire. Blessedly, the children all were able to be rescued. But I read the new story to Ryan and said, "That's something parents choosing a school wouldn't think to ask, whether the school buses had received proper maintenance."

"Why are you are worrying about choosing a school? I thought we were homeschooling!"

"What? I thought we hadn't officially decided. I mean, for this year, yes..."

"You don't want to homeschool now?! I thought this was what you wanted!"

So yes, basically we've been officially decided since January 2017. We are very much of the philosophy that kids shouldn't be pressured at this age and sort of have been "unschooling" for now... But more on that next week!
Posted by Pamela M M Berkeley at 4:33 PM