First of all, May the fourth be with you. 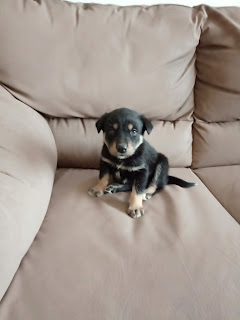 At least that's what he looked like when we met him back in March. Ryan, the kids and I went for a family walk and came into a park and there he was. He had two siblings with him but he was the only one who didn't go fall asleep under a bush. Ryan and I knew it was insane. But we have also always wanted a dog and he wouldn't have much of a life as a street dog. He seemed about eight weeks and we took him home "on trial." 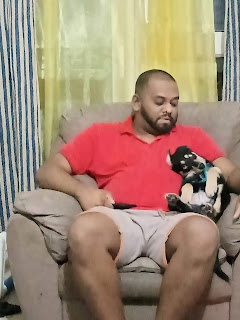 Dreamer named him. I asked her if she had thought of names for him thinking she'd come up with something fantastical I wouldn't want to yell in a park and I'd have to coach her into something more acceptable. But she said, "I was thinking... Leaf." I decided we'd spell it Lief, like the Viking, Lief Erickson, and loved it.

At first it was not that bad. Vex has been stressed but Princess was cool with the puppy at first. But now they're both stressed and that's not great. A lot of the issue is the puppy isn't yet house trained and I think they are upset by the dog rudely going all over and not covering it. And I'm obviously frustrated by that as well but he's still a puppy and I know he'll get there.

The kids love him, though his exuberance both delights and terrifies them. He's less nippy than he was when we first got him but still tries to play bite us sometimes. Mainly he's just jumping up on them in excitement too much. But I figure we'll tackle house training first and then worry about further training.

It's been pleasant that each evening we put Rider in the stroller and Dreamer and I take Lief for a long walk. He really needs a morning walk too but at this point I can't fit that in since my sleeping disorder has me too stupid to handle two kids and a dog at that hour safely. We have a terrace that functions as a small yard but if I leave  him out there by himself for longer than ten minutes he starts barking. Our terrace is in the midst of our highrise apartment towers, of which we live on the lowest floor-- basically meaning if he barks out there he can annoy dozens of neighbors.

During the day it's getting to 110 degrees farenheit so really exercise needs to be morning or evening. Ryan doesn't get home from work until 2am, usually gets to sleep around 3 or 4am. Rider wakes up between 7 and 8:30. So I can't leave the kids with Ryan and take the dog myself. And a couple mornings a week I work once Ryan does wake up. The remaining mornings Ryan usually wants to sleep in. So for now one walk in the evening has to do during the weekdays at least. Tonight I took him out for an hour and a half walk though, solo, to hopefully help get some of that energy out. I am thinking I'll do really intense walks like that each weekend and we'll do our like 20-40 minute walks each evening during the weekdays. Once monsoon gets here in July and things cool off a bit maybe we can do an afternoon walk too.

Overall we're exited to have a puppers! We're a little worried about the cats and their stress, but hopefully once he's house-trained things will be smoother. I also hope we can figure out a good rhythm to keep his hyperness at a minimum. I don't think he's actually a high energy dog, Indian dogs spend most of their day sleeping and while they're active at night they're still just patrolling limited territory. So I think once he gets older one walk would be sufficient anyway, it's just getting through these puppy days.
Posted by Pamela M M Berkeley at 11:56 PM