I've been doing this every year since my daughter was a toddler and the kids love it!

I wanted to do an Advent calendar, but they're hard to find in India and a simple cardboard one would be ripped so easily by a toddler anyway, so I'd have to keep it up high enough she wouldn't be able to really see the detail to see which doors are open or closed...

And then I stumbled across one of the best ideas ever. Sadly, I can't credit the brilliant person who came up with it because I don't remember. But someone suggested make a paper chain with 24 links and each day of advent remove a link. It's visceral for children to see the chain shrinking smaller and smaller, building up that anticipation of Christmas that is such a vital part of Advent.

I added to it by deciding to write on the inside of each link a Bible verse to read and a Christmas carol to sing. I would cast (we have chrome cast on our television) the song to the tv and each day after playing the new song would play the previous songs if we had time, creating a growing playlist to flavor the season.

I've been saying for years I'd make a printable and share it with you all, but every year Advent creeps up on me un-prepared and I think "next year."

Well this is the year!

For those without a printer, I'll also just copy and paste the list below and you could just copy the verses and carols onto paper yourself., or choose your own carols. You can use colored paper (pink and purple are classic Advent colors!) or some years I've just used computer paper and let the kids color on the back and then cut it up. You can either copy the whole verse as I've provided or just the book chapter and verse and look them up in your own Bible. I've done all of that over the past few years. I also have been making up new combinations of verses and carols each year, but now that I've finally done the printable I'll probably keep this one for the next few years!

Here is the printable and below is the list! 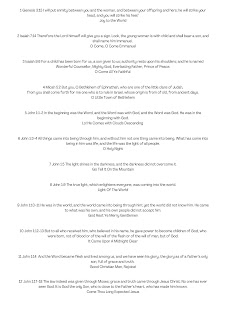 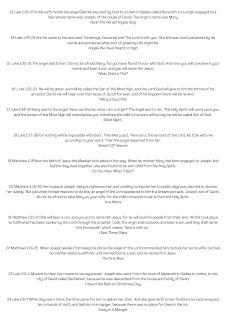 1 Genesis 3:15 I will put enmity between you and the woman, and between your offspring and hers; he will strike your head, and you will strike his heel.’

Joy to the World

2 Isaiah 7:14 Therefore the Lord himself will give you a sign. Look, the young woman is with child and shall bear a son, and shall name him Immanuel.

3 Isaiah 9:6 For a child has been born for us, a son given to us; authority rests upon his shoulders; and he is named Wonderful Counsellor, Mighty God, Everlasting Father, Prince of Peace.

4 Micah 5:2 But you, O Bethlehem of Ephrathah, who are one of the little clans of Judah,

from you shall come forth for me one who is to rule in Israel, whose origin is from of old, from ancient days.

Lo! He Comes with Clouds Descending

Go Tell It On the Mountain

8 John 1:9 The true light, which enlightens everyone, was coming into the world.

Light Of The World

9 John 1:10-11 He was in the world, and the world came into being through him; yet the world did not know him. He came to what was his own, and his own people did not accept him.

It Came Upon A Midnight Clear

11 John 1:14  And the Word became flesh and lived among us, and we have seen his glory, the glory as of a father’s only son, full of grace and truth.

12 John 1:17-18 The law indeed was given through Moses; grace and truth came through Jesus Christ. No one has ever seen God. It is God the only Son, who is close to the Father’s heart, who has made him known.

13 Luke 1:26-27 In the sixth month the angel Gabriel was sent by God to a town in Galilee called Nazareth, to a virgin engaged to a man whose name was Joseph, of the house of David. The virgin’s name was Mary.

14 Luke 1:28-29 And he came to her and said, ‘Greetings, favoured one! The Lord is with you.’ But she was much perplexed by his words and pondered what sort of greeting this might be.

Angels We Have Heard on High

15  Luke 1:30-31 The angel said to her, ‘Do not be afraid, Mary, for you have found favour with God. And now, you will conceive in your womb and bear a son, and you will name him Jesus.

What Child is This?

16  Luke 1:32-33  He will be great, and will be called the Son of the Most High, and the Lord God will give to him the throne of his ancestor David. He will reign over the house of Jacob for ever, and of his kingdom there will be no end.’

17 Luke 1:34-35 Mary said to the angel, ‘How can this be, since I am a virgin?’ The angel said to her, ‘The Holy Spirit will come upon you, and the power of the Most High will overshadow you; therefore the child to be born will be holy; he will be called Son of God.

18 Luke 1:37-38 For nothing will be impossible with God.’  Then Mary said, ‘Here am I, the servant of the Lord; let it be with me according to your word.’ Then the angel departed from her.

19 Matthew 1:18 Now the birth of Jesus the Messiah took place in this way. When his mother Mary had been engaged to Joseph, but before they lived together, she was found to be with child from the Holy Spirit.

Do You Hear What I Hear?

20 Matthew 1:19-20 Her husband Joseph, being a righteous man and unwilling to expose her to public disgrace, planned to dismiss her quietly.  But just when he had resolved to do this, an angel of the Lord appeared to him in a dream and said, ‘Joseph, son of David, do not be afraid to take Mary as your wife, for the child conceived in her is from the Holy Spirit.

21 Matthew 1:21-23 She will bear a son, and you are to name him Jesus, for he will save his people from their sins.’ All this took place to fulfill what had been spoken by the Lord through the prophet: ‘Look, the virgin shall conceive and bear a son, and they shall name him Emmanuel’, which means, ‘God is with us.’

22 Matthew 1:24-25  When Joseph awoke from sleep, he did as the angel of the Lord commanded him; he took her as his wife, but had no marital relations with her until she had borne a son; and he named him Jesus.

23 Luke 2:3-4 All went to their own towns to be registered.  Joseph also went from the town of Nazareth in Galilee to Judea, to the city of David called Bethlehem, because he was descended from the house and family of David.

I Heard the Bells on Christmas Day

24 Luke 2:6-7 While they were there, the time came for her to deliver her child.  And she gave birth to her firstborn son and wrapped him in bands of cloth, and laid him in a manger, because there was no place for them in the inn.

Away In A Manger